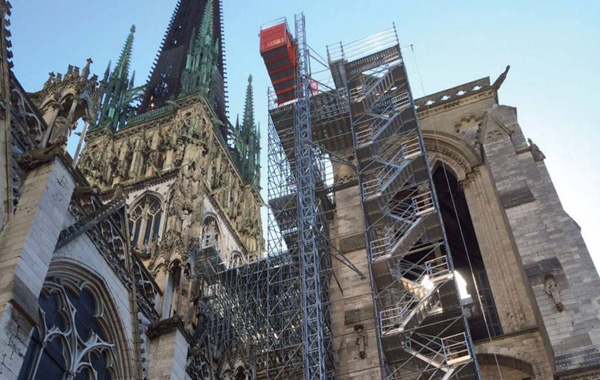 The Rouen cathedral is an emblematic monument of French historical heritage. Its cast iron spire alone is 61m high and reaches a peak of 152m. Its structure is reinforced with Corten steel, following consolidation work undertaken in 1976 to increase its wind resistance. In 2015, the Haute-Normandie DRAC undertook a complete restoration operation on the spire, which was once again weakened.

The aim of the restoration work is to address the pathologies related to the 2 materials making up the spire, corten steel and cast iron. This involves several tasks: removing the paint (done in 1914), replacing missing parts, treating and consolidating weakened parts, replacing fasteners and treating the surface with an appropriate paint system.

"The particularity of a cathedral environment of is that there are many very fragile protrusions, sculptures, gargoyles... that must remain undamaged. To stabilise our scaffolding, and out of respect for historical structures, we have to anchor it to the stone joints. "

This religious building's specific environment makes this work site a true technical feat. The spire of the Rouen Cathedral has a complex and asymmetrical architecture:

The work on the Rouen Cathedral is to be carried out in and on an occupied place and site with masses to be held within the cathedral during the erection and dismantling of the scaffolding. The work site will therefore have to be regularly interrupted, calling for a certain flexibility in working hours.

152m of scaffolding in 7 assembly phases:

The work site's accommodation facility is located inside the spire chamber. The scaffolding will be erected in several stages, in sections: platforms, installed every 20m, will support the scaffolding. Once a phase is completed, a platform will be installed to erect the next phase. Only the cathedral's south façade will remain so provided continuously. It will include an intermediate material storage platform and will also act as a starting point for lifts and stairs.
The scaffolding solution chosen was the M368 multi-directional scaffolding (8 positions). This material makes it possible to comply with 100% of geometric and architectural shapes. During phases 3, 4, 5 and 6, the scaffolding will be 100% covered to protect the fillings. At such a height and in a region like Normandy, this is a true technical feat. UNISTEP lifts and stairs (mechanically welded aluminium) will be used to provide access to the scaffolding. They will be connected to each area, in sections, up to a height of 120m.

Facts and figures about the M368 multi-directional scaffolding for the Rouen Cathedral spire:

For the restoration of this atypical site, the product selected is 100% standard. All the specificity, technicality and particularity of this site is reflected in this custom-made assembly solution. This scaffolding erection also includes the collection of cleaning water. A waterproof system with waste water evacuation downspouts will run along the entire spire, scaffolding and platform from the highest point to the ground. 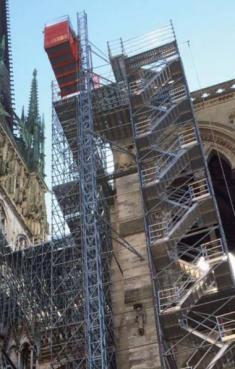 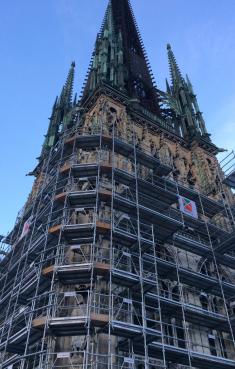